We have expanded the core application of the MELARECON with S7 server functionality. This makes it possible in the future to connect the data points, such as actual value states or setpoint inputs, of a MELARECON to a SCADA system or HMI device.

The implementation of S7 standards enables new application scenarios for your OEM product. In addition, MELARECON products can be seamlessly integrated into the existing state of the art of automation technology.

After activation of the S7 server, the device behaves like an S7 315-2 PN/DP. The diagnostics of the device can be successfully queried via the SIMATIC Manager or the TIA Portal.

The operating state can also be viewed and the program execution can be stopped with a stop command.

Which data points of the MELARECON program are to be made available where and how on the S7 side can be easily defined using the file interface. Write access to data areas can also be prevented via the interface. Limits for possible setpoint inputs can also be set.

Automation up to the cloud from a single source 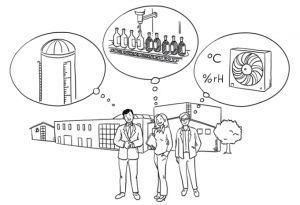 In this area you can give your consent by ticking the relevant checkbox for each cookie category. Confirm your selection by clicking on "Save & Accept".
Necessary Always Enabled
These technologies are required to enable the core functionalities of the website. This allows us to remember your previous actions, such as the choice of your previous cookie consent or the language selected on this page.
Marketing
Marketing cookies are used to track visitors across websites. The intent is to show ads that are relevant and engaging to the individual user and therefore more valuable to publishers and third party advertisers.
Statistics
Statistics cookies help website owners to understand how visitors interact with websites by collecting and reporting information anonymously.
SAVE & ACCEPT